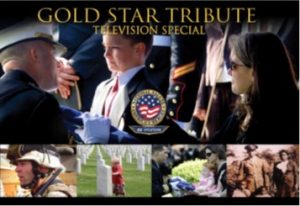 THE MEMORIAL DAY SALUTE TO SACRIFICE

Memorial Day is about remembrance and sacrifice, honoring our military and first responders for their inspiration, courage, and stories of hope.

In order to bring back the true meaning of Memorial Day, The Gold Star Tribute Television Special pays tribute to those who serve our nation…and those who have paid the ultimate sacrifice on behalf of our well-being and freedom.

Airing Nationally on top broadcast stations in 53% US